The recent Euro-BioImaging “Research. Captured” competition was a great success! 106 entries were received across the three competition categories. Images and videos were shortlisted according to their visual impact, informative content and technical proficiency by a team of scientists and graphic designers.

The winner of the Biomedical Imaging category was Marco Aiello from NAPLab - IRCCS SDN, Napoli, Italy, with his image Multimodal view of the human brain.

Marco Aiello is a a physicist with a PhD in Computer Science obtained at the University Federico II, Naples. Currently, he is the coordinator of the NAPLap (NeuroAnatomy and Image Processing Laboratory the Medical Imaging Laboratory) at IRCCS SDN - SYNLAB, based in Naples, Italy. Their activities span from research and software development in the field of multi-modality medical imaging technology (especially PET/MR) to data analysis and processing techniques for neurological, oncological and cardiovascular imaging.

​His winning image shows an axial slice of the human brain with the fusion of glucose metabolism, structural anatomy and axonal pathways on as revealed, in-vivo, by [18F]-fluorodeoxyglucose positron emission tomography (FDG-PET), T1-weighted magnetic resonance (MR) and diffusion tractography (DT), respectively. All modalities have been acquired in one shot, within the same session and with the same scanner (simultaneous PET/MR hybrid scanner), without requiring further processing for the alignment among different modalities. T1-weighted MR and FDG-PET are shown in grayscale and "JET” colormaps, respectively. Colors of axonal bundles revealed by DT are directionally-coded. The image was captured with Simultaneous PET/MR scanner; Biograph mMR, Siemens in Naples, 2017.

“I would like to underline that all our scans and processed images, and obviously the winning image, are the result of the interdisciplinary activity of the whole NAPLab.” 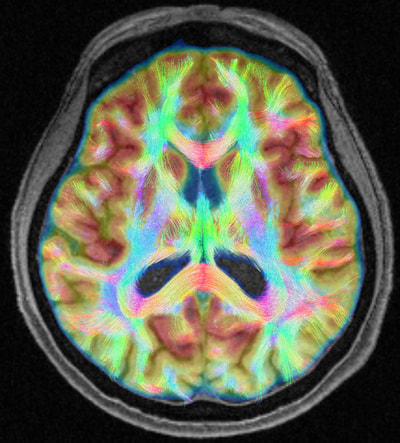